During this period of home/remote learning, this resource has been designed for use by your student as self-directed study, although you also could teach/mediate the lesson via an online platform. In either setting, it is estimated that it would take around 45-60 minutes to work through the resource.

The material is designed for use with students in Key Stage 3 and Key Stage 4. It is presumed that students will have some foundational knowledge of the Holocaust; without this, the student is likely to find accessing some of the higher order thinking in this resource challenging. Ideally, students will also possess some knowledge of the Warsaw Ghetto: having this will benefit their learning considerably, since it will allow them to put the events of the Uprising into their historical context. The resource can be used in various subject settings – including History, RE and Citizenship.

The resource centres upon a specific event: the Warsaw Ghetto Uprising. The Uprising was a remarkable moment in the history of the Holocaust for a number of reasons. It was, for instance, one of the most sustained instances of armed resistance against the Nazis anywhere in occupied Europe in the entire history of the Second World War; it was conducted by a relatively small number of armed persons, nearly all of whom had no military training or expertise; and it took place in the most dire and desperate of circumstances, enacted by men, women, and children who had suffered months of hardship living in appalling conditions within the ghetto. That these men, women and children were fighting to delay their almost inevitable deportation to the gas chambers of Treblinka, only makes this episode all the more remarkable.

The history of the Warsaw Ghetto Uprising thus raises a raft of questions rich for exploration by students. At a very fundamental level, knowing about this event provides a direct rebuttal to any notion that Jewish people did not ‘fight back’ during the Holocaust, and/or that they were somehow complicit in their own demise. There is much to contemplate, through the Uprising, about heroism, human will and agency, as well as the determination of ordinary people to try to ‘resist’ death. Yet at the same time, the history of the Uprising is – ultimately – steeped in tragedy, horror and brutality. Put simply, the Uprising did not prevent those Jews remaining in the Warsaw Ghetto being sent to their deaths. Nor is it possible to ignore – amidst the heroism of the resistors – the eventual resolve of the perpetrators to completely and utterly destroy the ghetto and its inhabitants, showing no quarter as they set fire to buildings, hunted down resistors, and murdered at will.

It is these sorts of contrasting and conflicting issues that students can be invited to explore as they consider matters of meaning and significance through the material. As they do so, they are also asked to exercise and hone their skills of source analysis, to employ critical thinking, and to contemplate some of the broader and knottier issues surrounding ‘resistance’ and the Holocaust. This includes recognising that caution is needed in understanding how and why some people
behaved the way that they did, and how the choices that people made were contingent on their choices and circumstances. 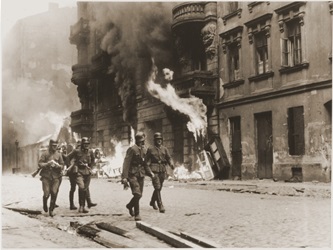