I have reported from all over the world. I have witnessed unspeakable things. I have seen dead and dying people in terrible abundance. Those experiences would invariably bring one phrase to mind, a phrase that haunts me to this day. ‘I entered the world of a nightmare’. Not my words but those of my father, Richard Dimbleby, spoken 75 years ago when he entered Bergen-Belsen with the British liberators in April 1945.

He was a BBC war correspondent accompanying Montgomery’s Second Army as the troops fought their way through Northern Germany on their way to Berlin. Several POW camps had already been liberated by British troops, but this was their first personal experience of the full horror of Nazism. My father had no idea of what he would find until he entered Belsen for the first time, finding himself in what he described for millions of British people as ‘the world of a nightmare.’

It is that nightmare that we mark on this grim 75th anniversary.  Belsen is now a vast, desolate space, rough grass and tracks surrounded by a forest of birch trees. You might for a moment think it was a nature reserve. And then you see the mounds that conceal the mass graves of those tens of thousands who perished there in the weeks before the British arrived. There are graves too and a monument to those tens of thousands who died there. At the entrance to the site you will find a modern museum which, with stark clarity, tells the full story of the atrocity that was Belsen.

I went there with a team making an ITV documentary – Return to Belsen – to retrace my father’s footsteps and hear the testimony of that dwindling band of survivors who wanted to share their memories of life and death at Belsen. It has been a searing experience: to hear men and women in their eighties and nineties describe calmly how they played among the dead and dying or crawled over corpses to find scraps of food and water is to re-live their nightmare but with today’s perspective. Hearing their stories of gnawing hunger and of SS guards who cruelly abused them merely because they were Jews – and therefore a ‘sub-human’ species – is to remind oneself why these horrors should never be forgotten. It can happen again.

My father, whose report from Belsen touched millions of listeners around the world (there was no television news in those days) later became the most eminent broadcaster of his era. At home though he never spoke of it to me. Like many others he preferred to bury his memories and ‘move on’. I only know about his feelings through his public words which I did not hear until I was an adult and not much younger than he was when he filed his report. It still brings me to tears as it did to those who heard it in the spring of 1945.

The images from Belsen – emaciated figures lying, half-dead, half alive, on open ground in freezing weather while thousands of corpses were bulldozed into great pits – are excruciating to witness let alone to recall. Some can’t bring themselves to speak of it since it even haunts them to this today. But those who find the resolve to do so – and their number s are diminishing from age and infirmity – know it has to be done for as long as they have the strength to remind us. They are tormented by the fear that the Holocaust will be forgotten. And they are haunted by a deeper fear: that those who seek to deny it ever happened or claim that it was not really so bad, might be one day be believed. When survivors like Anita Lasker-Wallfisch says ‘If they had killed us all, there would not be a single witness… we are the voices for the people who are lying in mass graves’ it is because she wants to ensure that we hear the truth, however agonizing it is to repeat it.

Later in 1945, my father was at the trial of the SS Commandant of Belsen, Joseph Kramer – the ‘Beast of Belsen’ as he was known. The evidence placed before the British Military Court, as my father said in his dispatch from there, showed the world ‘in cold, proven, legal detail what happens behind the frontiers of a country that sells its soul to a dictator’. Like so many of his generation, my father believed with passion that the price of freedom is indeed eternal vigilance – that the ballot box and the rule of law are not god-given but have to be cherished and nurtured.  He knew them to be fragile human creations that rest on shallow foundations, which – as the Nazis discovered – can only too easily be washed away by consent, that it is only too easy for people to sell their souls before they are aware of the true character of the transaction they have made.

This is not to say that history repeats itself, but that the past offers a warning – a reminder of what human beings can inflict one another by twisting the truth, distorting the facts, and re-writing the past. When demagogues rant at mass rallies or pollute the social media to exploit the fears and resentments of vulnerable people, they should be exposed for what they are – disciples of that evil which led to Auschwitz and Belsen.

It is their tub-thumping rhetoric which licenses the gullible to regard those with different skins or other cultures as if they were in some way inferior beings or a threat to their own existence. It is their dark forebodings which turn the plight of immigrants – putting their lives at risk to flee war or poverty – not merely into  non-citizens but into non-people. It is against such snake-oil salesmen of ‘popular’ solutions to complex social and economic problems that Belsen warns us.

As Tomi Reichenstal, one of the survivors who shared his experiences at Belsen says: ‘We must remember that the Holocaust did not start with gas chambers but with whispers, and then abuse…’ And, as Shraga Milstein says: ‘I regard it not as a piece of history but also as present day choice that people have to make…Belsen is an expression of the power of hatred.’

I would like to see the Holocaust embedded in the curriculum of every school and college. Nothing matters more in the era of social media than to help young people to discern truth from lies and fact from fiction. But this can only be effective if teachers themselves have the knowledge to impart and the urge to do so. That is why I salute the work of organisations like the UCL Centre for Holocaust Education which plays a crucial role in supporting teachers and students by providing appropriate ways and means to overcome ignorance and to challenge misconceptions. By using ‘evidence and testimony to inform, engage and inspire’ the Centre plays a crucial part in ensuring that generation after generation will say, like my father did in his final dispatch from Belsen 75 years ago,  ‘we must vow with all our hearts that such things will never happen again’. 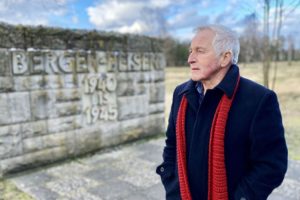