Gaps in student knowledge and understanding about the Holocaust

Victims – how can we understand the Holocaust without understanding what was lost? The majority of students that responded to our survey knew Jews were the primary victims of the Holocaust, but most had little understanding of why they were persecuted and murdered.

“ Some of the misconceptions of the students are surprising (and horrifying). I need to make sure these are addressed in my scheme of work.

RE teacher, who has attended the UCL teacher development programme”

Even after studying the Holocaust, only 37% of young people knew what the term ‘antisemitism’ means.  Explanations often rested on misconceptions about who the Jews were rather than on where anti-Jewish ideas had come from.

Many of the young people surveyed incorrectly believed that Jews made up a large proportion of the German population during the 1930s.  Only 8.8% correctly identified the pre-war Jewish population to be less than 1%.

We also found that a third of the respondents massively underestimated the scale of the murder of Jewish people, with 10% believing that no more than 100,000 lives were lost.

Many students knew that other groups were also victims of the Nazis, but were unfamiliar with any of the specific policies enacted against each group.  They assumed all victims were targeted and treated in similar ways, chiefly because they were ‘different’.

The story of Leon Greenman, an Englishman deported from the Netherlands to Auschwitz-Birkenau with his wife and two year old son, is a thread woven throughout the Centre’s teaching and learning materials.  Along with other powerful and moving case studies, this helps to make the enormity of the Holocaust accessible to school students.

There are a range of educational workshops and activities that explore the diversity of pre-war Jewish life with challenging and engaging ideas for exploring the vibrancy and diversity of European Jewish communities and how individuals coped with rising antisemitism on the eve of the Holocaust.

Book your place on the Centre’s free full-day CPD here.

Who was responsible for the Holocaust? Overwhelmingly the evidence from our research shows young people explaining the Holocaust as perpetrated by Hitler and ‘the Nazis’, fewer than 10% suggested that the German people bore any responsibility for the genocide.

More than half (56%) of younger students (Years 7-9) appeared to believe the Holocaust was solely attributable to Adolf Hitler.  With age, students increasingly appreciated that the Nazis played a significant role in the Holocaust, however most students saw the Nazis as an elite group loyal to Hitler rather than a political party that enjoyed significant, broad-based support across all sectors of the German population.

Very few students appeared to know the role played in the Holocaust by other collaborating regimes (such as the Vichy government), Axis allies or local, indigenous populations across Europe.

Being human? and Unlocking antisemitism Through a range of detailed case studies during our ‘Being human?’ lesson, students in the classroom uncover how and why ordinary people became complicit in mass murder, posing searching questions about what it is to be a citizen in the modern world.  Key questions explored include:

During the lesson ‘Unlocking antisemitism’ teachers work with the film ‘Roots of antisemitism’ to uncover the origins of this ‘longest hatred’, and explore continuity and change from medieval anti-Judaism to modern antisemitism.  This provides essential knowledge and understanding to counter common myths and stereotypes of the Jewish people held by many perpetrators of the Holocaust.

Click here to see our list of currently available additional CPD sessions or email us at holocaust@ioe.ac.uk to request a session in your area.  You can also see ‘Being human?’ in action in our video of Nunnery Wood High School students teaching the lesson to their peers.

Understanding the chronology and geography of the Holocaust Evidence from our research shows that students do not have a secure or confident chronological understanding of the Holocaust.

For example, 40% incorrectly believed that mass killing began immediately after Hitler’s appointment as Chancellor in January 1933, with just 7% demonstrating an understanding that the invasion of the Soviet Union in June 1941 was the event that triggered the organised mass killing of the Jews.  Similarly, many students were also uncertain as to how and why the Holocaust ended, only 46% correctly knew that the end of the Holocaust came as a result of the Allied liberation.

In addition many students struggled to correctly place the location of the Holocaust geographically.  55% of survey respondents incorrectly thought that the mass murder took place in Germany, not Poland; with 51% believing that the largest number of Jews murdered during the Holocaust also came from Germany.  When asked to identify words connected to the Holocaust 71% of students recognised that Auschwitz was explicitly connected to it, whereas far fewer students were able to associate camps like Treblinka (15%) and Bergen-Belsen (15%).

What was the Holocaust?

“The Timeline activity was really enjoyable; it was probably my favourite lesson…to have this visual picture across the wall, and…it was interesting to read case studies about people who had died and some who had survived, and we had to place them on the timeline as well…I felt really privileged because, yeah, you got to look at these people’s lives.

This practical classroom activity, part of our full-day CPD ‘Unpacking the Holocaust’, directly addresses chronological understanding, locating the powerful stories of individual victims within their historical context, and connecting these with Nazi decrees, policies and actions.  This teacher workshop and accompanying classroom resources address what happened, to whom, where, when and why in a profound and meaningful learning experience.

Book your place on one of our core CPD sessions taking place around the country now. Within popular consciousness the Holocaust is often characterised by the application of modern industrial technology, the ‘factories of death’ for the purpose of mass murder.  As much as there is truth in this, the reality is more complex and more discomforting.

In this lesson students make a historical enquiry into Treblinka and discover the reality of genocide is not as straightforward as we would believe.

This twilight teacher workshop, which can be booked through our website or requested by emailing us at holocaust@ioe.ac.uk, unlocks classroom materials that engage students, extend their spatial knowledge of the Holocaust, and deepen understanding of the development of genocide.

This new teacher workshop, developed in partnership with Yahad-In Unum and Imperial War Museums, explores the often neglected history of the mass shooting of Jews in Eastern Europe and the widespread knowledge and complicity of local populations.

Evidence from our research shows that students typically had a very limited and often erroneous understanding of Britain’s role during the Holocaust, with more than one third incorrectly believing that the Holocaust triggered Britain’s entry into war.  A further 17.6% believed the British drew up rescue plans to save the Jews, while 24% mistakenly believed the British did not know about mass killing until the end of the war.

Britain and the Holocaust – a new teacher workshop

Run for the first time in October 2015, this new twilight teacher workshop, developed by the UCL Centre for Holocaust Education, draws upon documents from the National Archives, the Weiner Library, the Churchill Archives and the Mass Observation Archives to explore how and when news of the Holocaust first reached Britain; what was understood by Churchill, his government and the British armed forces, and how they reacted, together with the responses of the British public and the Jewish refugee community to news of mass murder.

If you are interested in participating in this teacher workshop contact us at holocaust@ioe.ac.uk to request a date in your area. 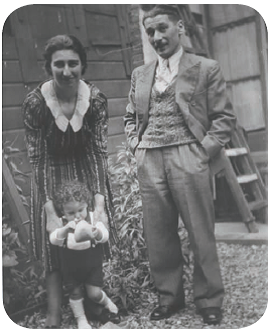 Leon, Else and Barney Greenman, deported to Auschwitz-Birkenau in 1943.