When I first came to Priestlands I was aware that the school held each year a Holocaust Awareness Day in the second half of the spring term. It was a day that the Year 9 pupils would be off timetable and working in workshops run by different departments across the school – poetry and eyewitness accounts in English, more recent genocides in Geography and RE, pieces of art influenced by the events of the Holocaust,  and the historical nature of the Holocaust looking at the story of one man. In the afternoon a witness testimony given by a survivor.

I have been at Priestlands for five years now and the witness I have had the pleasure to host and get to know is Mala Tribich. She is a whirlwind, a bundle of energy and enthusiasm, a woman now in her 90s who is a wonder to behold. I hold her in the highest regard – more so knowing the story that she shares each year with hundreds of school children up and down the country. Mala has been our guest for over ten years now.

Her predecessor in visiting us was Leon Greenman. Yes, that Leon Greenman. You remember, I mentioned the man they study in the History workshops – yes him. Leon was a frequent visitor to Priestlands – a man whose mission was to tell his story to all that would listen. When I was preparing for open evening this year I discovered some old newspaper clippings and a photo. They were of Leon’s visit to the school in 2003 when he was 92. He’s looking sprightly in the photos – a name tag on his brown blazer saying “LEON GREENMAN AUSCHWITZ 98288.” He is signing bits of paper, homework planners, programmes of the day held by a long queue of pupils wanting to hear more from a man who had seen so much. 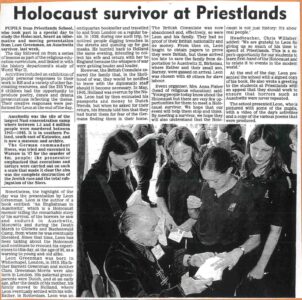 On the clipping too are his words – so clear today as they were almost 20 years ago.

“It could all happen again, I meet people who were in the camps and want to forget, but I want the world to know what happened so they won’t vote again for the Nazis.

These young people may only be 13 and 14, but they are older in thought than people of my generation were at the same age. They can understand my message.”

One of Deputy Heads used to take Leon back home to London and he has some very interesting anecdotes about his chauffeuring Leon to his home.

“When Leon came to speak at the school he needed a lift home. We’d set off from school around 4:15 and try and get to London about 6:30 – always depending on the traffic. As it was still the end of February it was often dark when we pulled up outside Leon’s home. I was amazed when I dropped him off that the windows were either boarded up or had bars over them – and that the letterbox had a wire cage over it.

I asked Leon about it once when I opened the car door for him and walked him to his doorstep. He answered in a very matter of fact way – he was still a target after all these years of aggression and prejudice. He was targeted by members of the National Front and other far right groups for speaking out about injustice, antisemitism and going into schools to tell his story. He had bricks through windows, flaming bags of dogs mess in the letterbox, abuse and anger hurled at him. At the end of the day Leon had succeeded in getting his message out there and the result was the attempt to silence him. 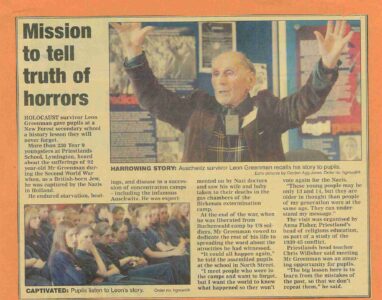 Another time I was driving him home and we were chatting and then all went silent. After a few minutes I thought I had lost Leon, that he had passed quietly in the car. I begin to fear and at that moment with a snort Leon woke up and continued the conversation that had stopped fifteen minutes before.

Leon was a gentle man. A great man – though he would not have wanted to be called that. He is was an inspiration and a pleasure to have come and speak to that generation of pupils.”

We now have the children of those pupils at the school and this year they will be hearing Leon’s story and that of other witnesses.

I wish I had the chance to hear Leon speak. He sounds a remarkable man – a boxer, a singer, a barber, a book dealer, a husband, a father, a survivor, a witness. I feel it’s such a shame, personally, that I never met Leon. However I feel it is up to me to keep his memory alive when I teach the pupils in my classes about him, Else and Barney.